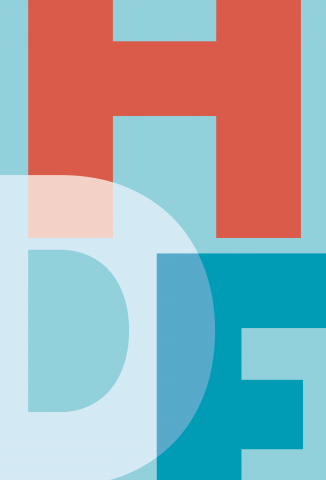 The logo of HDF is dressed in brick color, white and azure blue.

The letter H is the most highlighted one. Being the first letter of the three initials and the symbol of the hospital, the H flies over the two other letters and reflects by its brick color the human touch of HDF as well as its cordiality and hospitality. This color embodies the bricks of the traditional Lebanese houses and reminds us of the safety of a house’s roof.

The letter D is white. This transparent white refers to limpidity and hygiene.

The azure blue letter F is the incarnation of HDF’s importance in the Mediterranean, mirrors its status of an important pole in the region and witnesses its openness to the world.

These three elements that complete each other portray the three pillars of HDF and its triple mission:

Hospitalize patients while offering them an advanced medicine and quality health care,

Dedicate its researches and analysis to participate in medical advances and

Form health professionals at the service of patients and collectivity.

The logo belongs to the European graphic school by its structure and its colors reflect the modern and futuristic side.

HDF opens a new chapter of its book 100 years later