1888: Establishment of the Faculty of Medicine of Saint Joseph University, following an agreement signed between the French government and the Jesuit Fathers. However, the Faculty needed a teaching hospital.

1911: Under the impetus of Reverend Father Lucien Catin s.j. and upon the initiative of “Le Temps” newspaper, the Parisian Press Syndicate launches a subscription in France to build the Hospital on land purchased by the French government.

1914-1918: The First World War breaks out and construction projects are immediately frozen.

1923: General Weygand, his successor, inaugurates Hôtel-Dieu de France and the hospital opens its doors and admits its first patient.

1965: An agreement between the Hospital and the Congregation of the Sisters of the Holy Hearts is signed, thus delegating them the nursing administration mission.

1984: The French government transfers the direct management of HDF to Saint Joseph University through a renewable long-term lease of 50 years. Reverend Father Jean Ducruet s.j. endows it with statutes.

2001: Inauguration of the new hospital building and numerous hospital departments.

2005: Inauguration of the Private Clinics Tower.

2010: Under the impetus of Reverend Father Rene Chamussy s.j., Rector of Saint Joseph University, the Hospital decides to adopt a new governance system to meet its challenges in a permanently changing and evolving healthcare world. HDF 2020, a decennial project is thus put in place.

1975-1990: During the Lebanese Civil War, the Hospital continued to provide care to thousands of wounded without ever failing in its mission. 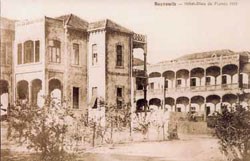